If you have been asked to arrange a funeral that would have included a New Orleans band during this difficult and challenging time, we can help with our virtual New Orleans Funeral Jazz Band. Click here for more information

The Mississippi Swamp Dogs New Orleans Jazz Band have been attending and providing New Orleans Jazz for funerals for over twenty years. They provide a sensitive, professional and individual service over the whole of the country at an affordable price. Call for a quote if your loved one has requested such a band to give him or her such a send off. Below is the band performing live a “dirge” and more happy music too. The New Orleans Funeral Jazz Band has been a mainstay of New Orleans culture for many years.

Here in Britain people became aware of this way of celebrating the passing of a loved one through the film “Live and Let Die”, which opens with a New Orleans Street scene and a funeral featuring such a band. the film, made back in the seventies, is constantly referenced by clients when ever our band attends.

”The New Orleans Funeral Jazz Band gave my brother (aged 87 years) the best send off ever imagined at his funeral celebration yesterday. Jeff’s Band arrived well before time, met immediate family and played before, during and after the service.

We went for an upbeat celebration which the Band achieved to perfection. The whole gathering were saying it was the best funeral ever and loved the style and the manner in which Jeff and his Band conducted themselves.

If you have ever fancied a real ‘send off’ which will not upset the older generation (imagine the age of some of the guests) and will take the pain out of a funeral then go for it with Jeff and the Mississippi Swamp Dogs. 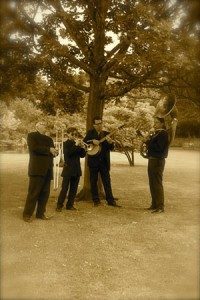 The proceedings start with the dirge. This is the slow procession, usually playing a hymn such as Just a Closer Walk With Thee, Amazing Grace or the Old Rugged Cross. This signifies the mourning of the individual who has died. Once the coffin has been interred then the band will strike up a happy song such as “Didn’t He Ramble” “The Saints” or “After You’ve Gone”. This represents a celebration of the persons life. Hopefully long and richly lived.

Our band can meet the cortege at the cemetery gates and parade up to the chapel for the service. Alternatively, we can also meet at the family house and parade down the road with the hearse and mourners. In the chapel we can provide quiet music for the reflection. Then after the service has finished, the band usually play uplifting music outside as people exit the chapel. Finally, if you would like the band to accompany the family and mourners to the wake, the band is happy to play here too. Contact the band here for more information and a quote.

Our New Orleans funeral band has attended many West Indian Funerals over the years and have an excellent selection of traditional hymns to play around the graveside for the “filling in” of the grave by family and friends.

For jazz band hire information of all kinds click here.